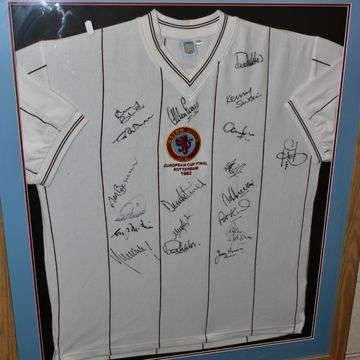 A FOOTBALL shirt signed by the Aston Villa team which won the 1982 European Cup is coming to auction in Lichfield.

It was the first time the Midlands team took the trophy, beating Bayern Munich 1–0 in Rotterdam at the final on May 26 1982, making it the sixth consecutive victory for an English side in the competition.

A shirt autographed with 19 signatures including winning goal-scorer Peter Withe and substitute goalie Nigel Spink will go under the hammer at the Lichfield Auction Centre, Fradley Park, with Richard Winterton Auctioneers on Monday, August 8.

The catalogue can be viewed online now via our Auction Dates page – the shirt is Lot 568.

Glazed in a 102cm x 86cm frame, the shirt also features the signatures Des Bremner, Kenny Swain, Colin Gibson, Allan Evans and Jimmy Rimmer – the original goalkeeper who, 10 minutes in, suffered a repeat of a recurring shoulder injury and was replaced by Spink in what was just his second first team appearance for the club.

The shirt comes with a framed poster print depicting Aston Villa playing in the FA cup final at Wembley in 2000 – the last to be played at the old Wembley Stadium.

“It’s a superb piece of sporting memorabilia which would be a showstopper on the wall of any Villa fan,” said auctioneer Richard Winterton.

“And what a match to commemorate, too – Aston Villa won the 1980-1981 Football League but this was the first time lifting the European Cup, which also continued the streak of English teams winning the trophy.

“Brian Moore’s commentary of the winning goal went on to be displayed at Villa Park.

“And it was an especially huge day for replacement goalkeeper Nigel Spink, who kept a clean sheet with a highly praised performance leading to him becoming Villa’s first choice goalie for the next 10 seasons.”

Richard added: “President of the Football Association himself, Prince William, personally supports the Villa – and coincidentally he was born in 1982, just a month after this iconic match!”

The shirt and framed print are estimated to sell for in excess of £200 in Monday’s auction, which starts at 9.30am.

For more information on auctions and valuations, call 01543 251081 or email office@richardwinterton.co.uk.