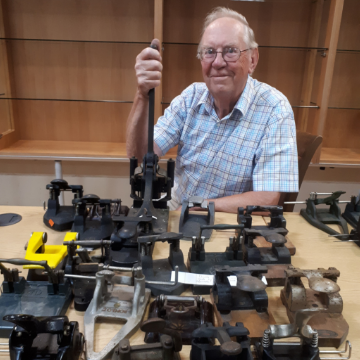 WHEN it comes to hobbies, a Midlands man’s collection from the past four decades is bringing a ‘hole’ new take on pastimes.

Retired teacher Peter Duffell, 82, pictured, does not collect stamps or coins or even toy cars – but hole punches. And he could well be the ONLY person in the world to do so.

Since 1978, Peter has been fascinated by how the deceptively simple task of cutting a hole in paper can be achieved in a multitude of ingenious ways devised since Victorian times and perhaps beyond.

The grandfather of six has now acquired more than 200 punches – many of which are beautifully engineered with up to 30 separate parts.

Peter, who taught French, Italian and occasionally Latin admits some may consider his hobby ‘eccentric’ but has gained great pleasure tracking down the instruments from across the globe.

Peter’s collection ranges from the quaint to the quasi-industrial, with punches coming from all over the world. There are examples from Japan, the USA, Czechoslovakia and Germany.

Most are the familiar double hole punches but some can sheer out four holes and other are multi-hole punches – one ingenious multi device has been manufactured by engineering several standard punches on to a shared platform. 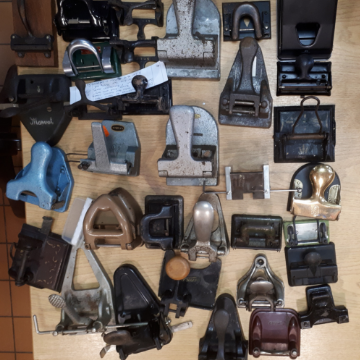 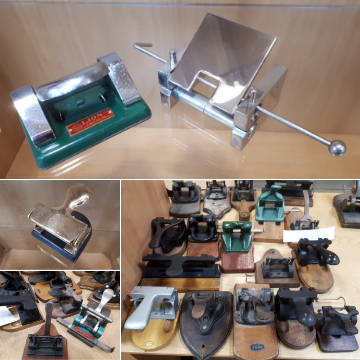 “Modern punches use thin steel plate and plastic which have a colourful, aesthetic appeal to the buyer which older machines did not have,” said Peter.

“I believe that my collection covers the whole history of punches from the Victorian era to the 1960s and, with a little TLC, would be of museum quality.”

After 40 years of amassing his haul, Peter has now decided to put the collection up for sale and they will be auctioned in 10 lots at Richard Winterton Auctioneers at The Lichfield Auction Centre on Wednesday, September 4.

He is hanging on to one for old time’s sake – a Swedish model dating from 1900.

Even Peter’s very first punch – by the brand Bullfinch – will be up for sale. It was bought on impulse in Lichfield Market for 50p in 1978.

“It just looked interesting. I took it home, took it apart, took the rust off it, oiled in and displayed it,” said Peter.

“In a curious way, it’s all down to Lichfield Market – if I hadn’t walked past at that point, none of this would have happened.”

Peter started his career as a teacher at Aldridge Grammar School from 1964-1970, when he moved to Tamworth Grammar School and became head of modern languages.

In 1979, he moved to John Willmott School in Sutton Coldfield before retiring in 1991.

On retirement he ran Holly House bed and breakfast in St John Street, Lichfield, until 2005. He still lives in the cathedral city.

Peter’s other hobbies and interests include canals and inland waterways, railways, crosswords, bridge and bowls. He is also vice-president of Lichfield Museum Bowling Club based in Beacon Park.

Married to Gill, the couple has three children – Martin, Carolyn and Ian – and six grandchildren.

“Unfortunately, some punches aroused suspicion at Munich Airport once and had to be taken away for examination – the punches, not me!” said Peter.

Other trials of a hole punch collector include a tangle on German eBay, where Peter once mistakenly bid 1,000 euros instead of 10 and was unable to withdraw the bid!

The collection will be auctioned in 10 lots at Richard Winterton Auctioneers at The Lichfield Auction Centre, Wood End Lane, Fradley Park, on Wednesday, September 4.

“It is an absolutely fascinating collection the like of which we’ve never before seen,” said valuer Sarah Leedham.

“This could well be the only hole punch collection in the world.

“There is such a variety of ages and designs – it is a cornucopia of delights for stationary aficionados and collectors of interesting and unique, well-engineered devices.”

Problems solved by hole punches in a variety of ways include:

How to achieve a sharp cutting edge.

How to make the handle retract.

How to collect the chads – the circular waste paper

What form of paper guide to use

How to vary the distance been holes punched – eg 7cm to 8cm.