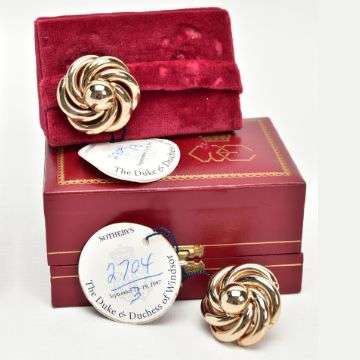 Wallis Duchess of Windsor items sell for £1,730 in Lichfield auction

ITEMS which belonged to Wallis Simpson, the late Duchess of Windsor, have sold at auction for £1,730.

There was a huge amount of interest for the earrings, belts and stationery found in the duchess’ estate after she died in 1986.

Initially auctioned off after her death, they were acquired by the vendor at a subsequent auction in New York in 1998.

The Staffordshire collector then auctioned the possessions with Richard Winterton Auctioneers at The Lichfield Auction Centre on Tuesday, July 19, as part of the summer Fine Art Sale.

Lot 136, pictured, was a pair of Bergere gold-plated clip on earrings, in a red and gilt case with an interlinked WE – for Wallis and Edward – below a coronet sold for a hammer price of £500.

Auctioneer Richard Winterton was yielding the gavel. He said: “We had a huge amount of interest for these items which belonged to the duchess.

“They were acquired at auction in New York in 1998 by our vendor, who has always been fascinated by Wallis.

“Judging by the interest and flurry of bids, many share that fascination in a woman who continues to captivate people more than three decades after her death and nearly 90 years on from the constitutional crisis in Britain which led to the abdication of Edward VIII.

“Wallis is said to have summed up her life with the words: ‘You have no idea how hard it is to live out a great romance.’

“These personal possessions continue to give collectors of Royal memorabilia a direct link to that life.”

The stationery comprised a blank invitation card with matching envelope, pre-printed with ‘The Duchess of Windsor requests the pleasure of the company of…’ and letterheaded paper embossed with the duchess’ coat of arms and the address 4 route du Champ d’Entraînement, the house in the Bois de Boulogne in which the couple lived from 1952 for the rest of their lives.

A twice-divorced American, the romance of Mrs Simpson and King Edward VIII caused a constitutional crisis leading to Edward’s abdication in December 1936 less than a year after becoming king.

Following the duke’s death from throat cancer in 1972, Wallis became increasingly frail and lived out her final years as a recluse, supported her husband’s estate and an allowance from the Queen.

Bedridden towards the end of her life, she received no visitors apart from medical care and died aged 89 on April 24 1986 at that address in Paris.