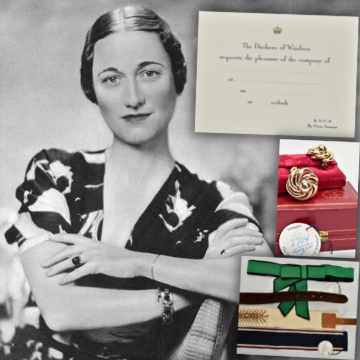 Invitation from the Duchess of Windsor: Wallis Simpson possessions in Lichfield auction

PERSONAL possessions of Wallis Simpson, the late Duchess of Windsor, are to be auctioned in Lichfield.

Earrings, belts and stationery found in the duchess’ estate after she died in 1986 go under the hammer with Richard Winterton Auctioneers at The Lichfield Auction Centre on Tuesday, July 19.

A twice-divorced American, the romance of Mrs Simpson and King Edward VIII caused a constitutional crisis leading to Edward’s abdication in December 1936 less than a year after becoming king.

After abdicating, the former king was made Duke of Windsor and married Wallis six months later – who in later years is reported to have summed up her life with the sentence: “You have no idea how hard it is to live out a great romance.”

Going under the hammer in Richard Winterton Auctioneers’ Fine Art Sale on July 19 are a pair of Bergere gold-plated clip on earrings, in a red and gilt case with an interlinked WE – for Wallis and Edward – below a coronet; five fabric and suede belts, in a variety of styles and colours; and a parcel of unused stationery.

The latter comprises a blank invitation card with matching envelope, pre-printed with ‘The Duchess of Windsor requests the pleasure of the company of…’ and letterheaded paper embossed with the duchess’ coat of arms and the address 4 route du Champ d’Entraînement, the house in the Bois de Boulogne in which the couple lived from 1952 for the rest of their lives.

The items were all auctioned off after the duchess’ death in 1986, with these coming to sale again in the late 1990s when they were bought by the vendor, a collector from Staffordshire.

Sarah Williams, senior valuer at Richard Winterton Auctioneers, said: “It was so interesting to have my hands on these items which were personal possessions of one of the mid-20th century’s most recognisable figures.

“The stationery which bears the address where Wallis Simpson died tells its own story of a life of grandeur even in those latter days.

“The duchess wore fairly plain A-line dresses a lot of the time and would jazz the ensemble up with a decorative belt.

“The collection as a whole may not fetch much more than £200 but in terms of living history these are fascinating items which hopefully well go on to delight other collectors of royal memorabilia.”

In the 1950s and 1960s, the Duke and Duchess of Windsor lived a celebrity high society life between Europe and America – although they never shook off suspicion dating back to WW2 of being Nazi sympathisers, having famously visited Hitler in Germany in 1937.

In 1952, municipal authorities offered the couple a home in Paris and they lived at 4 route du Champ d’Entraînement for the majority of the rest of their lives.

Following the duke’s death from throat cancer in 1972, Wallis became increasingly frail and lived out her final years as a recluse, supported her husband’s estate and an allowance from the Queen.

She suffered several falls, broke her hip twice and, in 1980, lost the power of speech.

Bedridden towards the end, she received no visitors apart from medical care and died aged 89 on April 24 1986 at that address in Paris.

The duchess’ effects feature as Lots 136 to 138 in the auction on Tuesday, July 19. The catalogue may be viewed online now via our Auction Dates page.

The Fine Art Sale, which starts at 10am, also features luxury watches including Rolex and Omega, jewellery, ceramics, glass, paintings and Mouseman furniture.

Viewing is by appointment only on Monday, July 18 from 10am-4pm – to book, or for more auction information and valuation enquiries, call 01543 251081 or email office@richardwinterton.co.uk.