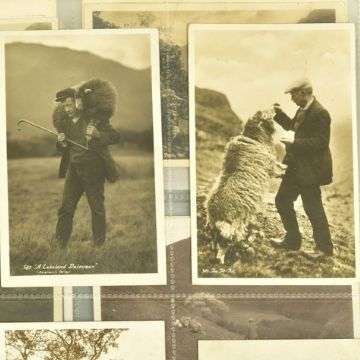 A STUNNING collection of postcards depicting life in Cumbria a century ago proved one to write home about after selling at auction in Lichfield for thousands of pounds.

The archive showcased the Lake District’s rich heritage from the Edwardian era to the mid-20th century.

There were also two images of the Vickers’ Naval Airship Number One in Cavendish Dock at the Port of Barrow in September 1911.

“The airship was nicknamed ‘Mayfly’, in that ‘it may fly one day’ yet it never did,” said Mr French.

Mr French added: “Ambleside, Windemere, Grasmere, Scafell, Coniston, Derwentwater, Skiddaw, Ullswater, Helvellyn, Penrith, Keswick, Derwentwater and many more were all present, making the collection as comprehensive as it was desirable.”

There were also scenes of the Appleby New Fair, the ‘Uppies and Downies’ football match traditionally played in Workington at Easter, several fetes, pageants and shows including the Coronation Festival.

The entire collection of postcards realised in excess of £5,500.

The online sale on Thursday, May 13, also featured fine and rare Great Britain stamps, with results including an excellent example of ‘plate 11’ Penny Black selling for £780, an 1867 £1 brown lilac fetching £750 and a Penny Red with four good margins making £680.

Richard Winterton Auctioneers has introduced new fortnightly Two Day Antiques & Home Sales every other Monday and Tuesday, starting at 9.30am each day.

In-person valuations for jewellery, watches, silver, antiques and collectables at The Lichfield Auction Centre are available strictly by appointment only between 9.30am-4pm on Thursdays.