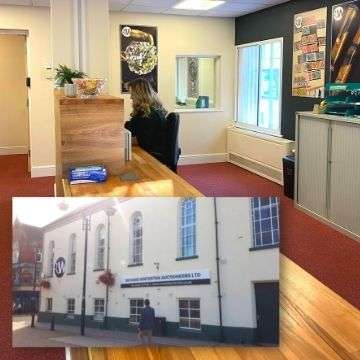 TAMWORTH’S new auction house is ready to start welcoming people through the door next week.

Richard Winterton Auctioneers’ latest saleroom at 34-35 Church Street is due to open on Monday, October 11.

“It has been a massive team effort to bring our project to revitalise this lovely Grade II listed building to fruition,” said auctioneer Richard Winterton, well-known through his appearances on BBC Bargain Hunt and Dickinson’s Real Deal.

“We can’t wait to welcome Tammies through the door and show them what we’ve been up to.”

He added: “Right now we are piecing together our first onsite Tamworth sale – more will be revealed in the coming weeks but safe to say we anticipate plenty of exciting auction action!”

Consignments of items to go straight under the hammer will be welcomed from 9am-4pm Monday to Friday and the team will also be able to assist with enquiries about house clearances and downsizing solutions.

There will also be free valuations daily by appointment Monday to Friday, with various specialists on different days.

Friday, October 15 and 22 will feature Stuart Hay to discuss cameras, hi-fi and records.

And Tuesday, October 19 will be a chance to meet coins valuer Phil Bridge and medals and militaria enthusiast Nick Thompson.

Appointments for jewellery, watches and silver can be booked for Mondays and Thursdays, with toys on Tuesdays and general valuations for all types of collectables and antiques on Wednesdays.

The first Tamworth auction is scheduled for Tuesday, October 26.

As with the firm’s current sales, it will be broadcast online with a live video feed allowing thousands of bidders to join in from all over the world.

The family firm, which has been auctioneering in Staffordshire for seven generations since 1864, previously had an office on Colehill just yards away from its new Tamworth saleroom.

Originally a 19th century music hall, the 3,700 sq ft Lower Gungate premises was converted into the town’s Arts Centre in the 1970s and later became a register office.

For all your Tamworth auction enquiries, email tamworth@richardwinterton.co.uk or telephone 01827 217746 from Monday, October 11.