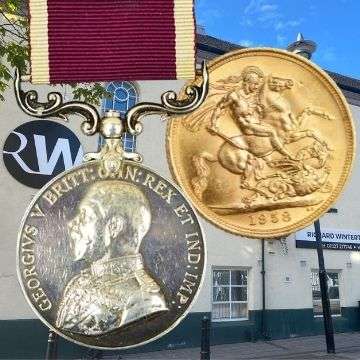 SPECIALIST valuers will be helping people discover if they are sitting on a fortune at free events in Tamworth.

Coin specialist Phil Bridge and medals and militaria expert Nick Thompson will be uncovering the stories behind items brought to Richard Winterton Auctioneers for valuation on Tuesday, January 25.

And on Thursday, February 3, stamps and postal ephemera specialist Phil Ives will be offering free valuations at the Lower Gungate premises.

The sessions at The Tamworth Auction Rooms, 34-35 Church Street, are all by appointment – to book, call 01827 217746 or email tamworth@richardwinterton.co.uk.

“Lawson became a flying ace in September 1918 by downing five more enemy aircraft that month – the last of those and his second kill of September 27 was that of noted German ace Fritz Rumey, with whom Lawson collided in mid-air.

“Rumey – who had 45 confirmed victories over allied pilots – baled out but his parachute failed and he plummeted to the ground.

“Lawson limped his damaged biplane back to the safety of the British lines and was awarded the Distinguished Flying Cross for his actions.”

The medals archive went under the hammer for £4,200.

A WW2 Luftwaffe airman’s wristwatch, in fine working condition, also made £4,200 in the same sale.

Bidders from across the globe take part in Richard Winterton’s auctions, which are all broadcast online.

The latest auction from the firm’s Fradley Park offices near Lichfield saw a haul of sovereigns and coin year sets total £6,000, with collections of stamp/coin cover albums selling for £1,900.

“With a buoyant market and an international as well as local audience for our sales, it’s a perfect time to take coins and antique money through auction,” added Mr Bridge.

“Whether it’s a single sovereign or a big numismatic collection, book your appointment and I’ll be delighted to have a look and see if you have some real-life hidden treasure!”

Another coins and medals valuation event with Phil Bridge and Nick Thompson takes place at The Trinity Centre, Church Hill, Mill Street, Sutton Coldfield, B72 1TF, on Monday, February 7, between 9.30am-11.30am. This event is also by appointment only – to book, call 01543 251081 or email office@richardwinterton.co.uk.

Valuations at Lichfield and Tamworth can also be booked every week for watches, jewellery and all kinds of collectables from toys and cameras to records and hi-fi equipment.

The next Tamworth auction is planned for Thursday, February 17, to feature toys and trains.