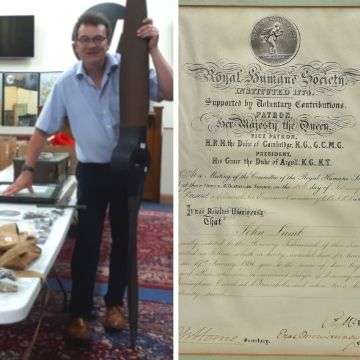 A TESTIMONIAL to a heroic landlord who saved two brothers from an icy grave features in an upcoming Lichfield auction.

The vellum certificate was awarded by the Royal Humane Society on February 18 1891 to Brownhills publican John Lamb.

A month before, on January 17, Mr Lamb braved the frozen Birmingham Canal to rescue local boys Cecil and Francis Price.

The Ogley Hay lads, aged around 10 and 14, had ventured out onto the ice but it cracked open, leaving them at the mercy of freezing water eight feet deep.

Mr Lamb, publican of the adjacent Pier Hotel, ran to help and, although the surface also gave way under him, saved the boys from drowning.

His gallantry was recognised by the Royal Humane Society, whose patron was Queen Victoria, in the certificate signed by chairman Sir Erasmus Ommanney, an Arctic exploration veteran.

The testimonial features as Lot 60 in Richard Winterton’s upcoming Militaria, Guns & Weapons auction on Tuesday, June 15, starting at 9.30am.

The sale, online from The Lichfield Auction Centre, includes an impressive array of medals groups from both world wars and militaria ranging from equipment and uniforms to a de Havilland aeroplane propeller, WW1 field artillery gunsight, Japanese WW2 swords and antique and sporting guns.

“It may have happened 130 years ago but the story of John Lamb and his rescue of the Price brothers still strikes a chord and such an incident would surely hit the headlines today,” said auctioneer Richard Winterton.

“Plunging through the ice on a frozen canal must have been a nightmarish experience and one which they almost certainly would not have survived had it not been for Mr Lamb.

“We don’t expect the certificate to necessarily sell for a huge amount of money, it’s simply a wonderful example of the wealth of local history which can turn up at auction.”

He added: “Given the publican’s heroic actions, we thought the award a nice fit for our Militaria auction.”

In his mid-30s at the time of the rescue, records show that John Lamb was still the landlord of the Pier Hotel in 1914.

Now long since demolished, the inn stood on the corner of Pier Street next to the Birmingham Canal and was originally called the Fortunes of War.

An extract in the Lichfield Mercury published Friday, February 27 1891, reported: “They [the Price brothers] had attempted to cross the canal and broke the ice at the centre, where the depth is eight feet.

“Mr Lamb ran to their assistance and, although the ice broke under him as well, he succeeded in rescuing the children.”

Heroics on the battlefield are well represented in the June 15 auction, with many collectable medals to WW1 and WW2 soldiers including a 1920 Danish Slesvig Medal, rarely awarded to British troops.

Lot 37 is a George V Military Cross named to Captain Kenneth Francis Kingwell, who served in the First World War with the Royal Field Artillery in the Battle of Palestine and was wounded fighting in Jerusalem on December 27 1917.

The sale also features a wooden propeller for a de Havilland Gipsy Major aircraft engine, such as would have powered a Tiger Moth or Chipmunk aeroplane, and a framed display of British military cap badges.

Appointments to view in person can be booked for Monday, June 14, between 10am-4pm, by calling 01543 251081 or emailing office@richardwinterton.co.uk.

A range of original art pictures featuring in Day One of next week's Lichfield auction includes oil paintings, watercolours, pastel and mixed media plus a big choice of limited edition prints 🖼

A George III gold coin from 1769 and 1895 South Africa gold pond, both in Monday's Lichfield auction. Book your FREE coins, medals and militaria valuation on 01543 251081 - upcoming dates include 25th January at our Tamworth saleroom and 7th Feb in Sutton Coldfield at The Trinity Centre. You can also email office@richardwinterton.co.uk

Any of these going for £500? Need some new wheels.

We are seeing more and more vintage clothing going under the hammer and our next Lichfield auction is no exception, with a big selection from Lot 439 to 445 and an array of evening, prom and bridesmaid dresses and shoes from Lot 384 to 400 👖👚👞👗👠

An Edwardian teapot and caster, Danish silver Georg Jensen by Sven Toxvaerd candlesticks plus early C20th goblet, salver and raised dish - all amongst the silver in Day One of our next Lichfield auction