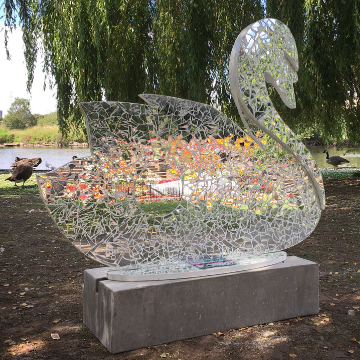 COLOURFUL, super-sized swan sculptures brightened Burton’s town centre this summer and now they have raised more than £11,000 to help local people in crisis this winter.

After 10 weeks gracing the streets and open spaces of Burton, the swans were taken away earlier this month and were auctioned for charity this week by Richard Winterton of Richard Winterton Auctioneers live online from The Lichfield Auction Centre.

He waived fees and commission so that all the money from winning bids went to YMCA Burton to help vulnerable and disadvantaged people.

Excitement soared through the evening as a large audience watched the online-only auction. Bidding was fiercely competitive from the start. In the end, the swans raised a stunning £11,270.

The Burton Swans project was dreamed up and organised by Tilley Bancroft from the award-winning Red Door Studios.

Paul Laffey, Chief Executive of YMCA Burton, said: “The swans project has been the most wonderful arts trail for Burton. Tilley has been working on the project for two years. She and her team have been a real inspiration and have done a brilliant job.

“We know that people have travelled long distances to come and see the Burton Swans. It has been the most wonderful collaboration and has left an indelible, positive mark on the town in the year of this awful pandemic.”

Each swan was individually named and sponsored by local businesses. The businesses chose designs for their swan from a wide range submitted by artists who then painted and decorated each swan.

Paul was one of many people who watched the auction live online. He added: “I was stunned by how much each of the swans sold for. The incredible total has been a welcome boost to our income as we’ve had more than 10 fundraising events cancelled in the year so far due to Covid-19.

“We are thankful to each and every individual and organisation that bid for a swan in the auction.” 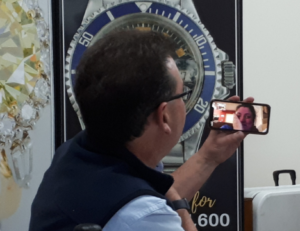 He said: “What a night! We had so many people online watching, it blew us away. The amount of interest was just phenomenal and although we had to stage the auction behind closed doors everyone really got behind the sale and made it a spectacular evening.

“We knew we had a lot of people registered before the auction began but nevertheless it was just a fantastic moment when the bids started flying in thick and fast for the first swan – and I was delighted to see that continue throughout the night.

“It was a lot of fun and we were delighted to be able to help raise money for this important charity.”

Richard added: “The swans are unique pieces of art and it will be interesting to see where they start appearing now. They are so beautiful. I am sure this will not be the last we see of them! Well done to all the artists for their vision and generosity.

“I’d also like to say huge congratulations to Tilley Bancroft, who has helmed this wonderful project and absolutely made it such a success. What a superstar she is.

“And also a big thank you to all the sponsors and everyone who helped make this an event to remember.”

The total was boosted when additional pieces by some of the swan artists were included in the auction with a percentage of their winning bids going to the YMCA. This brought the final total raised on the night to £11,633.75. 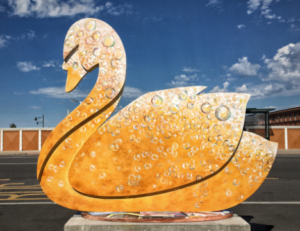 The highest price paid for an individual swan was £850, which was achieved for Burton’s Cygneture Brew, pictured above, a swan designed and painted by Derbyshire artist Victoria Wilcox. It had graced the forecourt of Burton railway station and was inspired by the town’s brewing history.

Project manager Tilley Bancroft paid tribute to the artists, sponsors, supporters and volunteers: “I am so proud to have been a part of such a fabulous team. I’d like to thank everyone who has helped and special thanks to the Brewhouse Arts Centre and our main sponsors, Marston’s, for their unflagging support.”