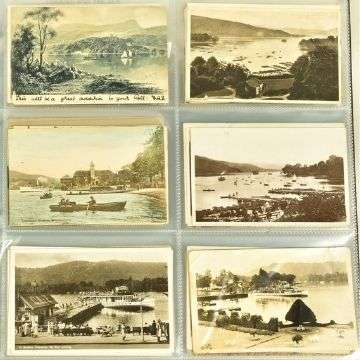 A UNIQUE postal history archive showcasing the Lake District’s rich heritage from the Edwardian era to the mid-20th century is coming up for auction.

The carefully catalogued collection of 4,500 postcards also includes records of day-to-day working practices from bygone Cumbria to evocative images of the Lake District.

They feature in Richard Winterton Auctioneers’ Stamps & Postal History Sale on Thursday, May 13, starting at 9.30am and broadcast online live from The Lichfield Auction Centre.

“It shines a light on how people lived their day-to-day lives,” said ephemera specialist Robert French.

“There are postcards of harbours including ship launches, sanatoriums, schools, colleges, courts, police and the army.

“These sit alongside pictures of early tourism in the region.

There are several postcards of the Appleby New Fair, the ‘Uppies and Downies’ football match traditionally played in Workington at Easter, several fetes, pageants and shows including the Coronation Festival.

The Lake District’s famous environment is comprehensively represented.
“It’s fascinating to how these famous places looked a century ago,” said Mr French.

There are also images of pre-WW1 biplanes, hydroplanes and two images of the Vickers’ Naval Airship Number One in Cavendish Dock at the Port of Barrow in September 1911.

“The airship was nicknamed ‘Mayfly’, in that ‘it may fly one day’. It never did,” said Mr French.

Another rare card shows the military funeral of Gunner Newell 33rd RFA, an artillery soldier killed by lightning on June 11, 1912.

“The archive opens up a fascinating window on a part of the country we all know and love and reveals what life was really like there a century ago,” added Mr French.

“The entire collection is beautifully presented and in fantastic condition.”

The May 13 auction also includes some of the UK’s most coveted postage stamps.