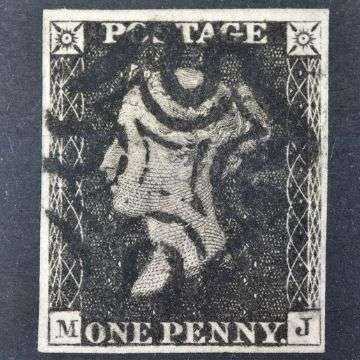 POSTAGE stamps and a unique postal history archive have fetched thousands of pounds at auction in Lichfield.

Richard Winterton Auctioneers’ Stamps & Postal History Sale on Thursday, May 13, included fine and rare Great Britain stamps and a collection of postcards relating to Cumbria and the Lake District.

Lot 11, an excellent example of a Penny Black printed on the 11th and final plate, pictured here, sold for £780.

Other philatelic treasures included an 1867 £1 brown lilac, which made £750, and a Penny Red with four good margins, selling for £680.

The Lichfield auction also featured numerous Mulready stationary – the world’s first pre-paid postal stationary, named after the artist William Mulready who was commissioned to illustrate it – and collections of GB stamps totalling thousands of pounds.

“Printed for less than a year, the Penny Black came in imperforate sheets which had to be hand-cut with big scissors,” said auctioneer Richard Winterton.

“As a consequence, examples of hand-cut stamps with four clear margins are rare.

“Add to that the fact that, of the 68 million Penny Blacks printed, just 168,000 were produced from the 11th and final plate.

“This was a great opportunity for collectors to acquire a wonderful example of a real philatelic treasure and it was hotly contested by bidders.”

A meticulously catalogued archive of 4,500 postcards relating to Cumbria and the Lake District was another highlight, with three particular albums covering Transport, Cumbria At Work and Cumbria At Play totalling £4,250 hammer price. The whole collection realised in excess of £5,500.

Richard Winterton Auctioneers has introduced new fortnightly Two Day Antiques & Home Sales every other Monday and Tuesday, starting at 9.30am each day.

In-person valuations for jewellery, watches, silver, antiques and collectables at The Lichfield Auction Centre are available strictly by appointment only between 9.30am-4pm on Thursdays.