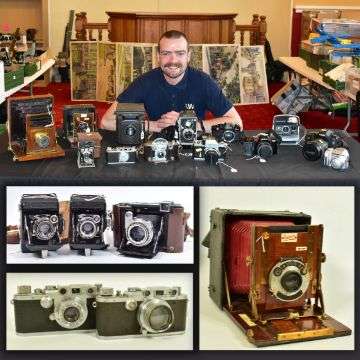 Picture this! Thousands of cameras for sale as Tamworth auction focuses on huge photographic collection

THOUSANDS of cameras are going under the hammer as a collection spanning a century of photography comes up for auction.

Incredibly, the entire array was accumulated by one enthusiastic collector and restorer.

It will all go under the hammer as part of Richard Winterton Auctioneers’ Cameras, Records & Musical Instruments Sale on Thursday, July 7, starting at 9.30am from The Tamworth Auction Rooms at 34-35 Church Street.

“It’s one of the largest collections I have ever seen,” said valuer and cataloguer Stuart Hay.

“It’s not just the size of the collection – it’s the overall quality that is impressive.

“It is effectively a lifetime’s fascination with cameras and the workings of, showcasing the history of photography from the turn of the 19th/20th century to the modern day.”

Ranging from plate cameras to digital compacts and spanning a century of photography, researching and cataloguing the collection took about 10 days’ solid work.

“It’s been an interesting journey through the ages of photography,” added Mr Hay.

“The collection is very much a love affair with cameras and the way they work.”

To book an appointment to view in person or arrange a valuation, telephone on 01827 217746 or email tamworth@richardwinterton.co.uk.