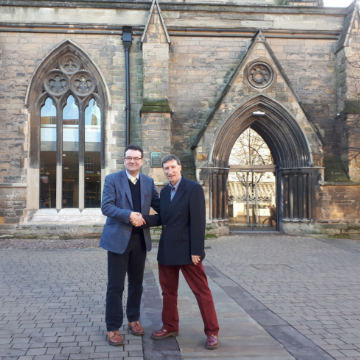 A LICHFIELD family which has been auctioneering in the city for seven generations has announced a long-term partnership with St Mary’s in the Market Square.

The “perfect” collaboration between Richard Winterton Auctioneers and The Guild Of St Mary’s – a registered charity – blends heritage, culture, education and entertainment, reflecting the ethos of both organisations slap bang in the beating heart of Lichfield city centre.

Richard Winterton Auctioneers will be displaying a variety of fine art and other interesting objects in the upper floor exhibition space, contributing to themed displays and joint events.

A raft of free valuation events and special auctions are also in the pipeline. 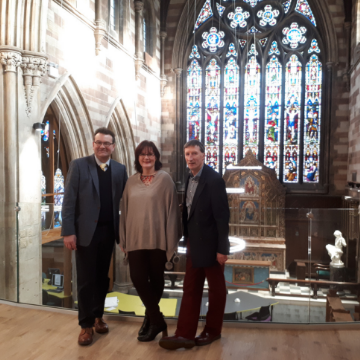 Pictured from left: Auctioneer Richard Winterton, vice-chair of the board of trustees Louise Fleming and Nick Sedgwick, chairman of St Mary’s trustees.

Mr Sedgwick said: “We are delighted with the arrangements, which will bring another strand to the offering within St Mary’s.

“Having the changing exhibition of articles for the fine arts sales will bring a new audience into the building and planned joint events will complement our core attractions.

“Soon the Silver Treasury will be open and our Photographic Archive will be available to view in the History Access Point.

“We have many events planned over the coming months, some jointly with Lichfield Library.

“We are recruiting volunteers to join us to – please contact us through the website. We have already held successful events in the performance space and lots more is planned in 2019.

Mr Winterton is delighted with the new connection. He said: “It is an absolutely perfect fit for us.

“The new look St Mary’s is just stunning – the moment I saw the redevelopment I was utterly captivated.

“It is a lovely space and we are proud and privileged to be a part of it.

“St Mary’s is a quintessential example of moving with the times to improve things for all while still retaining an absolute commitment to Lichfield. It perfectly echoes our ethos.” 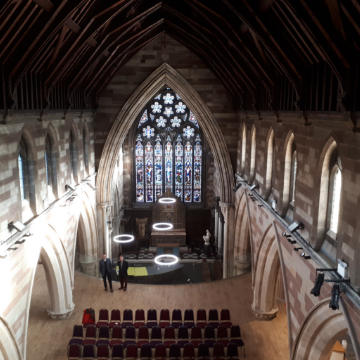 He added: “We have more exciting plans for Lichfield which we’ll be announcing very soon.”

Mr Winterton is also a supporter of the We Love Lichfield fund, from which St Mary’s has received two charitable grants.

The Winterton family name has been synonymous with auctioneering in Staffordshire since 1864, with early beginnings at Lichfield’s former Smithfield livestock market.

Designed by architect James Fowler, St Mary’s Church was completed in 1870. It was converted to a heritage centre in 1981 after the numbers of people attending the church dropped.

In July 2013, it was renamed St Mary’s in the Market Square and became home to Lichfield District Council’s tourist information service.

The multi-functional space also hosted numerous exhibitions, including that celebrating the 200th anniversary of the Lichfield Mercury in 2015.

Since then, the building has been stunningly redeveloped to accommodate Lichfield Library on the ground floor with over 100,000 books and audio-visual resources.

A flexible open space on the first floor – with a mezzanine overlooking the Dyott Chapel end – integrates a 140-seat area for performances, art exhibitions and workshops and from March will host displays and special events alongside Richard Winterton Auctioneers. 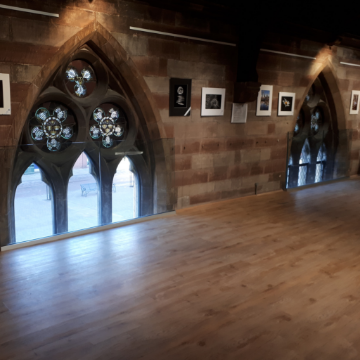 We're delighted to bring the vice-chair of the National Association of Jewellers Heather Callaway Ltd for a special jewellery and watches valuation day at the Burton Albion Community Trust hub near the Pirelli Stadium this Thursday, 30th September - to book, call us on 01543 251081 or email office@richardwinterton.co.uk 💎
Read more at www.richardwinterton.co.uk/news/burton-valuation-day-with-jewellery-and-watch-specialist-heather-... ... See MoreSee Less

Timepieces for Tuesday! This 18ct gold and diamond ladies Omega, Edwardian pocket watch with enamelled monogram on the reverse and an array of vintage Swiss wristwatches all feature in Monday's Lichfield auction - and you can meet us The Hub at St Mary's for more FREE valuations of watches and jewellery from 10am-12.30pm today! ... See MoreSee Less

📣 New catalogue klaxon! 📣
The digital catalogue for our next Lichfield auction is online to view now - 1,296 lots across two days including jewellery, watches, pictures, militaria, furniture, toys and much more...

Happy Monday morning everyone! A quick reminder that you can book today from 9am for our special jewellery and watches valuation day Burton Albion Community Trust with Heather Callaway Ltd on Thursday 30th September - call 01543 251081. PLus, check out our range of regular valuations at www.richardwinterton.co.uk/valuation-events/ ... See MoreSee Less

Top job! The signs at our new Tamworth auction house are looking fab. Lots of work has been going on behind the scenes and we're very excited to be up and running. Not long to wait now... Thanks Hardy Signs Ltd for doing us proud ❤
www.richardwinterton.co.uk/ ... See MoreSee Less

Wonderful to see the signs go up at our new Tamworth saleroom - thank you Hardy Signs Ltd for a sterling job ❤
PS stay tuned as more details on the opening etc will be revealed next week... ... See MoreSee Less

Welcome to Tamworth, we are looking forward to you opening! ☺️