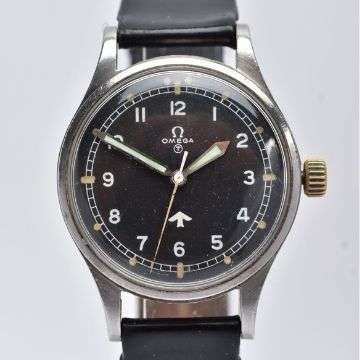 A BRITISH Military wristwatch had bidders reaching for the skies in a Lichfield auction.

The stainless steel Omega RAF pilot’s watch, dating back to 1953, went under the hammer on Day One of Richard Winterton Auctioneers’ Two Day Antiques & Home Sale on Monday and Tuesday, May 24-25 for £2,000.

Identified at a recent valuation at The Lichfield Auction Centre, the 37mm Swiss timepiece, calibre 283, was made under strict specifications from the British MOD with a 17 jewelled movement and bears the broad ‘crow’s foot’ arrow marking of the British Military.

“The quality and talent of artists always takes my breath away,” said auctioneer Richard Winterton.

The car started off Day Two leading into the furniture section which achieved a remarkable 98.2 per cent selling rate.

Two Day Antiques & Home Sales take place every other Monday and Tuesday, starting at 9.30am each day.

Each sale has its own dedicated digital catalogue, which can be viewed at www.richardwinterton.co.uk/auction-dates.