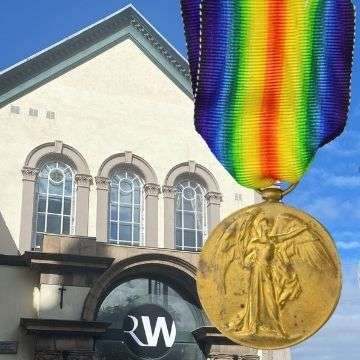 MIDLANDS medals and military specialist Nick Thompson will be offering free advice and valuations to Tamworth people on Tuesday, May 3.

Appointments with Mr Thompson, who will be at The Tamworth Auction Rooms, 34-35 Church Street, from 9am, may be booked on 01827 217746 or by email to tamworth@richardwinterton.co.uk.

Richard Winterton Auctioneers’ latest sales at the Lower Gungate premises saw bidders from all over the world battle it out with buyers in the room for a remarkable militaria collection including some of the last words ever written by evil SS leader Heinrich Himmler.

The macabre ‘lines’ inked by the evil architect of the Holocaust during interrogation and his silk washbag, liberated by Army Intelligence Corps sergeant Grenville Grayer in the hours that followed the SS chief’s suicide by cyanide capsule, plus Sgt Grayer’s British Empire Medal and three other trophies of war, totalled £6,710 under the hammer.

In the same auction archive, a Fairbairn-Sykes fighting knife sold for £1,250 and a Luftwaffe flak badge made £440.

“The stories behind medals and militaria are invariably fascinating and often emotional,” said Mr Thompson.

“Tamworth has a proud military history and I can’t wait to see what treasures we might uncover.”

Drop in for a personal consultation between 10am and 4pm on Tuesdays and Wednesdays.

Items may also be dropped off for valuation or consigned throughout the week.

Valuations can also be booked for collectables ranging from toys and cameras to records, hi-fi equipment and musical instruments.

The next Tamworth auction is planned for Thursday, May 12, to feature toys and trains.