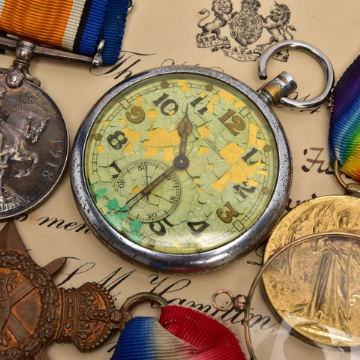 MEDALS, militaria and firearms are amongst the specialist items in Richard Winterton Auctioneer’s Antiques & Home Sale on Monday, March 29.

Held online-only live from The Lichfield Auction Centre, the sale starts at 9.30am.

Browse the catalogue and link to bid online here.

The auction features medals and militaria from World War One and World War Two alongside pre-WW1 and post-WW2 military items.

Here are some of the highlights:

The medals archive of Dr George Hall-Davis who, in 1914, interrupted his medical training to join the Royal Munster Fusiliers.

He served in France and Gallipoli in WWI, being promoted to captain and was mentioned in dispatches.

That certificate from General Sir Ian Hamilton, mounted on board dated December 11 1915, and a 1914-1915 Star trio of medals named to Lieutenant GH Davis are included in this lot.

Davis also went on to serve in WW2 with the 8th Army in Africa with the Royal Army Medical Corps, where he was mentioned in dispatches for a second time.

The lot includes an 8ins by 6ins photograph of Dr Hall-Davis in WW2 uniform, WW1 miniatures and a Jaegre-LeCoultre pocket watch (also pictured at top of page) with the British military crow’s foot marking.

Following WW1, Dr Hall-Davis completed his medical training and began as a hospital surgeon in 1920.

He was a GP in Lancashire for much of his career before moving to a practice in West Wickham and Kent a few years before dying suddenly aged 56.

The lot includes cuttings of newspaper obituaries published upon his death, which describe a much-loved and respected doctor held in high esteem by his family, colleagues and the communities he served.

The binoculars are stamped ‘beh’, indicating the maker to be E Leitz, Wetzlar, and the 7×50 optics appear fine and working.

The side of the case is embossed ‘beh’ 1944. These style optics were issued throughout WW2 to surface and U-boats of the Kriegsmarine.

A group of WW1 1914-1915 Star British War and Victory medals named to 8870 Private W Dobson together with a Memorial Death Plaque named William Dobson, two brass Wound Stripes with backings for uniform wear and spare ribbons and a 1914 Princess Mary tin (no contents).

Originally from Chester Le Street, Private Dobson was killed in action aged 24 on June 29 1915 while serving with ‘B’ Company 2nd Battalion.

He is buried at the Le Brique Military cemetery in Belgium.

Two antique sword sticks. One looks like a bamboo walking stick with a capped end; it has a carved bone handle and an oblong shaped blade marked Toledo.

The second has a simulated wood appearance and the end of the stick is pointed; it has crooked bamboo handle and houses an oblong crossed section unmarked blade.

The latter has retained all its original finish, is in correct working order and comes in the original box together with instruction leaflet in both English and German, a wooden barrel loading block and a spare set of rear and foresights.

Browse the catalogue and link to bid online here.

For enquiries, email office@richardwinterton.co.uk or telephone 01543 251081.