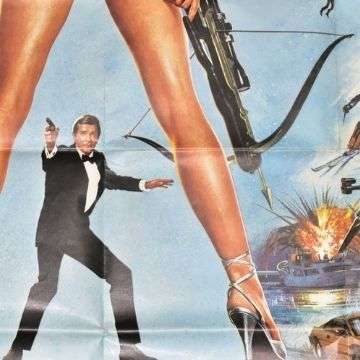 For Your Eyes Only: Roger Moore James Bond 007 poster in Lichfield auction

A VINTAGE cinema poster for one of Roger Moore’s 007 films is set to leave bidders at a Lichfield auction shaken and stirred.

The 3ft 3ins by 2ft 5ins For Your Eyes Only quad poster came to light on the 40th anniversary of the 1981 movie, the fifth film in which Moore played the suave spy.

Jon Price from Richard Winterton Auctioneers spotted the artwork folded up in a consignment from a house clearance.

The poster is estimated to fetch £400 when it goes under the hammer live from The Lichfield Auction Centre, Fradley Park, as Lot 547 on Monday, July 19.

“It was nestled quite innocuously in a box but upon inspection quickly transpired to be a piece of Bond memorabilia with a license to thrill,” explained Mr Price.

“It is a British cinema quad poster measuring 40ins by 30ins, printed in England by Lonsdale & Bartholomew Ltd, Nottingham, and typical of those made for display in cinemas to promote the latest blockbuster release.

“The poster has been folded and there are pinholes in the corners – but that just adds to its authenticity.”

For Your Eyes Only premiered in June 1981, setting an all-time opening day record for any film at any cinema in the UK, and went on general release across the country on the same day.

The risqué promotional poster for the film famously features a woman holding a crossbow facing away from the camera, with Moore’s tuxedo-clad Bond framed by her legs in the foreground.

Her cheeky pose was achieved by the model wearing a pair of bikini bottoms backwards to partially cover her posterior.

The poster caused some furore – mostly in America – with some editors airbrushing the image above the knee or even, in one case, painting a pair of shorts over the legs.

In 2018, a rare 1964 Goldfinger ‘Style B’ cinema poster by Robert Brownjohn – created at the insistence of censors in Ireland – was discovered in Tamworth by Richard Winterton Auctioneers and went on to sell for £6,700.

Ephemera specialist Robert French added: “Whilst it’s fair to say that the For Your Eyes Only poster is not quite in the same league as the Style B Goldfinger, this is nevertheless a great lot which Bond afficionados will undoubtedly be keen to get their hands on.

“The fact that it came to light on the 40th anniversary of the film gives this find a most serendipitous feel.”

The poster features as Lot 547 in Day One of Richard Winterton’s Two Day Antiques & Home Sale live from The Lichfield Auction Centre, Fradley Park, on Monday and Tuesday, July 19-20.

A mini treasure trove for fans of both the James Bond films and the literary 007 can be found in the following Lot 548, a collection of memorabilia including a signed photograph of Timothy Dalton, Roger Moore’s successor to the role.

There are film poster magazines for The Man With The Golden Gun and For Your Eyes Only plus the official souvenir brochure for the latter film.

The lot features a comprehensive collection of Pan paperbacks of Ian Fleming’s Bond books plus two screen adaptations, hardback specials for Moonraker, For Your Eyes Only and Octopussy, a special publication tying in with 1965’s Thunderball and the 1968 James Bond annual.

Also included are souvenir posters for A View To A Kill – Moore’s final Bond film – plus stickers, DVDs, soundtrack albums on original vinyl, a framed silver disc for The Best Of Bond and even a 007 clock!

Lot 513 is an almost complete set of the GE Fabri James Bond Car Collection of vehicles featured in the movie franchise from Dr No in 1962 to the present day.

The sale features 118 of the 134 1/43 scale diecast models, all complete and still sealed in original packaging with diorama base and photographic insert.

Fittingly, given 007’s famous love for the high life, the July 19 sale includes a selection of fine wines, collectable cigars and rare whiskies – including a numbered limited edition of The Glenlivet, a 25 year old single malt released in 1977 to mark the Queen’s Silver Jubilee.

Another Two Day Antiques & Home Sale is scheduled for August 9-10, with a Single Owner Collection auction including Ruskin ceramics on Tuesday, August 17. All sales start at 9.30am.

Free quotations for house clearances, probate services and in-person valuations at The Lichfield Auction Centre can also be booked on 01543 251081 or by email to office@richardwinterton.co.uk and free home visits for bulky items or large collections are available to arrange.