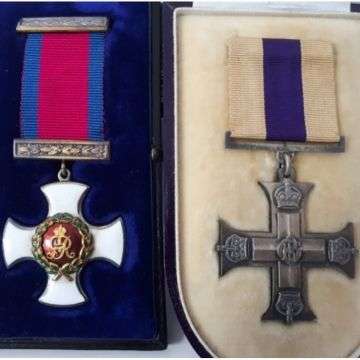 MYSTERY surrounds a heroic soldier with links to Shenstone who won two medals for gallantry in the First World War.

Captain William Paul’s actions saw him awarded the Distinguished Service Order (DSO) and Military Cross (MC) but he never made it home and lies buried in France after succumbing from wounds in 1917.

His medals archive goes under the hammer with Richard Winterton Auctioneers on Thursday, May 26.

The group consists of Capt Paul’s George V Distinguished Service Order, in box of issue; George V Military Cross, in box of issue; 1914 Star, British War and Victory Medal trio; together with George V Army Long Service and Good Conduct medals. Neither the DSO or MC were issued named; the others are all named to Paul.

Also included is his memorial death plaque named William Paul, together with the original card tube containing his memorial parchment scroll and King’s condolence note, plus the original issue slip for his WW1 trio and an Acme officer’s whistle attributed to Paul.

Prior to the Great War, he was an active Freemason and there are six boxed Freemasonry medals included in the archive.

The whole collection, which is contained in a small leather Freemason style case, is expected to fetch up to £4,000 at auction.

“Whilst clearly a heroic soldier who served in the 1st Battalion West Yorkshire Regiment, comparatively little is known of him,” said Mr Thompson.

“There are no known photographs, we don’t know where or when he was born and records show there was no age supplied for his grave marker, so consequently it is not known how old Paul was at the time of his death.

“But given the Army Long Service medal, which would have marked 20 years’ service, and a Freemasonry medal denoting membership of the White Horse Lodge in November 1902, we think it’s likely he would have been serving in the Army towards the end of the Boer War and therefore must have been in his 30s when he was killed.

“There was then a dozen years of peace during which time Paul has continued in the Army but would have been at liberty to be a Freemason.

“He was an experienced soldier when he went to France in 1914; in terms of existing records he really is quite anonymous until he gets the two awards of the Military Cross and the Distinguished Service Order.

“However, we do know that his widow lived in Shenstone as his medals and memorial condolences were sent by the War Office addressed to her in New Road.

“It’s not the first time I’ve come across such an enigma but it is certainly mysterious.”

Ironically, although the exact details of Capt Paul’s actions to earn the MC and DSO are shrouded by time his final mission is recorded.

He was awarded the Military Cross in the King’s military ‘new year honours’ and the Distinguished Service Order was given for actions in France, presumably towards the latter part of his three years of war.

His final combat operation came when Paul led a retaliation to heavy bombardment at Bourlon Wood on November 30 1917.

The operation ultimately succeeded in pushing back the Germans and restoring the line – but the victory cost Paul his life.

He was wounded and died the next day, December 1 1917, and is buried in the Rocquigny-Equancourt Road British Cemetery at Manancourt in France.

Aside from the same regiment, no other details are known as to the connection with Capt Paul.

Mr Thompson pieced the story together through pages of the war diary for the 1st West Yorkshire Regiment, which mention Paul being wounded on November 30 1917 and his DSO, as well as cemetery records from the Commonwealth War Graves Commission and entries from the London Gazette referring to Paul’s promotions and awards of the MC and DSO.

“With sufficient time and resources, there’s certainly plenty of potential research the next custodian of this fascinating collection will be able to explore,” he added.

“Despite the mystery, this lot is a complete archive of a man’s service for his country and his sad and untimely death in World War One.”

The military sale at The Tamworth Auction Rooms at 34-35 Church Street starts at 10am and also includes collections of stamps and ephemera.

The catalogue can be viewed online via our Auction Dates page a week before the sale.

Viewing takes place the day before the auction on Wednesday, May 25, from 10am-4pm by appointment. To book, telephone 01827 217746 or email tamworth@richardwinterton.co.uk.

To arrange a free valuation of medals and militaria with Nick Thompson, telephone 01543 251081 or email office@richardwinterton.co.uk.

Captain William Paul was born in 1878 and was at some stage employed as a jeweller.

A photograph of Capt Paul and his bride on their wedding day plus a copy of their marriage certificate will be available to the winning bidder.