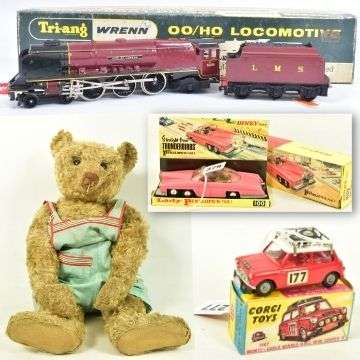 CHILDHOOD dreams are set to realise thousands of pounds as collections of model trains and diecast vehicles go under the hammer in a special auction of vintage toys.

Richard Winterton Auctioneers is getting up steam for the sale of 440 lots next Thursday, May 12, starting 9.30am at The Tamworth Auction Rooms.

A third of the auction, which will be broadcast online as well as hosting bidders live in the room, comprises of a Midlands single owner collection of more 160 trains including models by Hornby Dublo, Tri-ang Wrenn, Lima, Mainline, Graham Farish, Liliput and Dapol.

“This is a wonderfully impressive collection of locomotives, mostly electric, dating back to the 1950s,” said toy valuer Jon Price.

“Many of the OO gauge trains have been rebuilt, repainted, renamed and renumbered – consequently creating a lot of models which you simply can’t buy off the shelf.”

Other lots include rolling stock in various gauges and a large collection of spare parts and locomotive wheels.

The sale also features a highly collectable Steiff teddy bear dating back to the 1930s and a 1960s Japanese tinplate walking ‘moon explorer’, each of which are set to fetch hundreds of pounds, plus vintage Star Wars toys and Action Man figures.

Sparking the interest of bidders further is a special single owner collection of Corgi and Dinky diecast model vehicles from the 1960s and 1970s, all with original boxes and accessories.

“This is another impressive single owner collection which has been lovingly treasured by a Midlands vendor,” added Mr Price.

“It is one of the finest collections of diecast I’ve had the pleasure of cataloguing and there is sure to be a lot of interest for these pieces at auction.

“All these models and toys have given great joy to their owners over the years.

“Come sale day there will doubtless be big smiles on the faces of both vendors and purchasers looking to give these special collectables a new home, where they can carry on helping people make happy memories.”

Viewing at the Church Street premises takes place the day before the sale on Wednesday, May 11, from 10am-4pm by appointment.