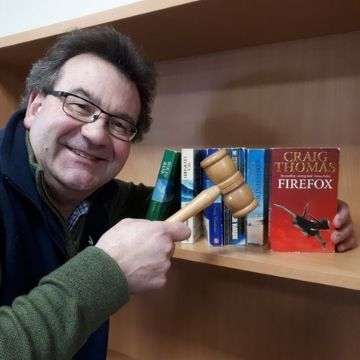 THE copyright to Firefox author Craig Thomas’ novels has sold at auction online from Lichfield for £36,000.

The sale on Monday, April 12, with Richard Winterton Auctioneers live from The Lichfield Auction Centre at Fradley saw international bids stack up from all over the world.

Fans regard Mr Thomas as the true inventor of the techno-thriller, with his run of meticulously researched novels revolving around cutting-edge technology.

His 1977 landmark book Firefox was made into the 1982 Hollywood blockbuster of the same name directed by and starring Clint Eastwood.

Auctioneer Richard Winterton said: “A wonderful and well-deserved result for the copyright to this superb collection of 18 novels whose audacious plots spearheaded an entire genre.

“Craig’s catalogue was Lot 1 and it certainly launched the sale in style with a huge amount of interest from across the globe.

“The international nature of an online auction with internet bidders joining us from all over the world seems very fitting too, given the focus on technology so intrinsic to Craig’s work.

“His fans regard the author as the true originator of the techno-thriller and hopefully this sale will prompt the beginning of a new chapter for his impressive catalogue.”

Mr Thomas died from pneumonia following a battle with acute myeloid leukaemia aged 68 in April 2011 and the copyright sale was carried out on the instructions of the estate of Craig’s wife Jill.

After university in the Welsh capital city, he moved to the Midlands to begin a career teaching English.

He taught at Lichfield’s King Edward VI School and Shire Oak School, Walsall Wood, where he wrote and directed several plays for pupils to perform and was also captain of the staff cricket team.

But he was able to move to writing novels full-time following the publication of his debut Rat Trap.

He and Jill married in 1967 and the couple lived for many years in Whittington on the outskirts of Lichfield, Staffordshire.