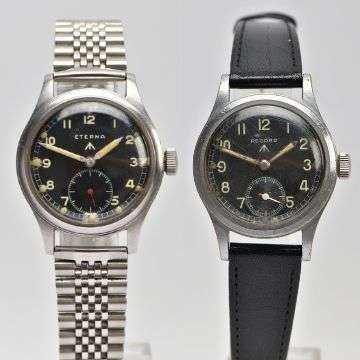 A ‘DIRTY Dozen’ military watch which has truly stood the test of time is coming up for auction in Lichfield.

The rare Eterna timepiece goes under the hammer in Day One of Richard Winterton Auctioneers’ Two Day Antiques & Home Sale on Monday, July 5, starting at 9.30am.

As well as a famous war movie, the Dirty Dozen is the modern nickname of a group of 12 watches commissioned by the British MoD for World War Two soldiers in 1944 and 1945.

Civilian watches were deemed not accurate enough and strict specifications for the new timepieces were required.

Yet whereas Omega’s Dirty Dozen model is known to have been made 25,000 times, as few as 5,000 are understood to have been produced by watchmaker Eterna.

The example featuring as Lot 129 in the July 5 sale live from The Lichfield Auction Centre, Fradley Park, is in very good condition, running and functioning well despite being close to 80 years old. It is estimated to sell for £600 to £800.

“They were built to the exacting chronometer standards and had to be accurate, waterproof and shockproof as well as having a black dial, luminous hands and markers, Arabic numerals, a ‘railroad’ minute track and a shatterproof crystal – all powered by a 15 jewel movement.

“The fact that these two are still ticking today is a testament to those high standards.”

Other military watches in the sale include models by Hamilton, CWC, Smiths, BWC and MWC.

Mr Winterton added: “Perhaps July is too soon to start taking about the ‘sale of the year’ but, whatever happens during the rest of 2021, this is definitely up there!”

Going under the hammer on the same day is a mysterious set of rare Manx 10p coins which may be the only mint examples left in existence, a large collection of silver and an array of gem set jewellery including diamond rings worth thousands of pounds.

For auction enquiries and to book a valuation appointment, telephone 01543 251081 or email office@richardwinterton.co.uk.

This wonderful collection including emeralds, diamonds and gold worth £3,500 is amongst the jewellery and watches consigned at yesterday's free valuation event in Sutton Coldfield - don't forget you can meet Ben Winterton today The Hub at St Mary's in Lichfield city centre until 12.30pm ⌚💎 ... See MoreSee Less

Diamonds, sapphire, ruby and opals amongst the jewellery on Day One of our next auction - and you can meet Ben Winterton for FREE valuations The Hub at St Mary's in Lichfield city centre today from 10am-12.30pm 💎

Happy Monday morning everyone! Just a quick reminder that we're offering FREE valuations of jewellery and watches in Sutton Coldfield at The Trinity Centre today and The Hub at St Mary's in Lichfield city centre tomorrow. Discover our options for free valuations of all items at www.richardwinterton.co.uk/valuation-events/ ... See MoreSee Less