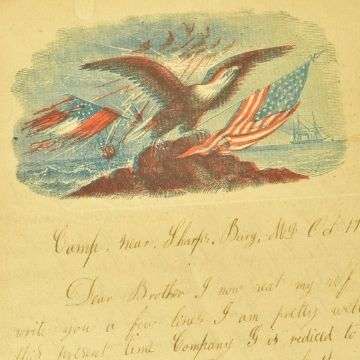 SOLDIERS’ letters sent during the American Civil War are among philatelic treasures featuring in a Lichfield auction.

An archive of early USA stamps and postal history dating back to 1799 to the mid-20th century is Lot 215 with Richard Winterton Auctioneers on Monday, June 21.

The auction is Day One of the fortnightly Two Day Antiques & Home Sale, starting at 9.30am both days, live online from The Lichfield Auction Centre, Wood End Lane, Fradley Park.

A large philatelic consignment from a single owner forms around 20 lots in the sale, including the ‘impressive’ collection of early USA stamps and covers, with particular interest in Civil War postal history.

It includes patriotic Union illustrated covers and fronts, together with a few covers from the Confederate side.

“The covers used by Confederate soldiers were not produced by the US postal authorities,” explained stamps specialist Phil Ives.

“They were relatively crude and of course only used for a short period.”

One letter headed with a patriotic eagle taking off with the Stars and Stripes flag, leaving a shredded Confederate ‘Stars and Bars’ version of the flag in its wake, is dated October 17 1862.

The author writes: “Chuck and I and the commanders of the company… the captain is at home he has lost his right arm and [the] lieutenant is at Washington sick and they think he won’t never be back to take command so we are left without a commissioned officer.”

The archive is estimated to go under the hammer for £500.

“It is a very fine lot for the specialist,” added Mr Ives.

Other highlights include Lot 227, a ‘solid’ Great Britain stamp collection valued at around £1,200 with five Penny Blacks including three with four good margins – the first postage stamp was hand-cut with big scissors and the stamp itself was rarely centred well.

More than 100 lots of model railway items anticipated to realise up to £10,000 also feature in the June 21 auction.

All catalogues can be viewed online via www.richardwinterton.co.uk/auction-dates.

Free home visits are available to assess large collections or house clearances. Telephone 01543 251081 or email office@richardwinterton.co.uk to book and also to arrange quotations for probate services.