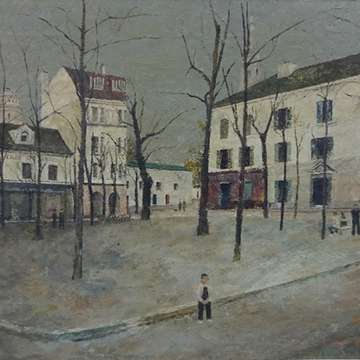 Richard Winterton Auctioneers Ltd are pleased to announce that up for auction in the forthcoming Country House and Decorative Art sale to be held on Wednesday 7th September are a collection of art works by Charles Gorham. Not only are several paintings on canvas and panel up for grabs but also a series of sketches and a quantity of book jackets.

Originally from Kent, Alfred Charles Harris Gorham was born in Bexley in 1916. Under the guidance of William Rothenstein the notorious British painter, printmaker, draughtsman, lecturer, and writer on art and Ernest Tristram the British art historian, artist and conservator at the Royal College of Art during the mid-1930's Gorham developed his own style and worked as a painter, engraver, silversmith and graphic designer.

Having spent time in both Paris and Scotland, Gorham settled close to home in Borough Green in Kent. During the 1950’s and 1960’s, he taught at Maidstone College of Art.

Using his very unique style, Gorham began a distinguished career as a book jacket designer working for most of the major publishing companies. He is perhaps best remembered for the fifteen covers he illustrated for the Collins Companion Guides.

There are further examples of his work held in the collections of both Derbyshire & Derby School Library Service and the Victoria & Albert Museum.

For further details please contact the saleroom on 01543 251081 or alternatively email office@richardwinterton.co.uk.