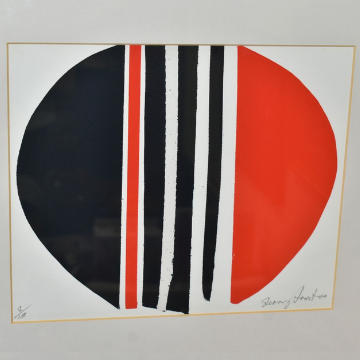 CORNWALL’S strong artistic heritage and the inspirational beauty of the landscape are celebrated in Richard Winterton Auctioneers’ Antiques & Home Sale on Monday, March 15.

The online-only sale includes more than 70 framed watercolours and pastels by James Marshall Heseldin, the last of the Newlyn artists, alongside folders housing numerous sketches and other watercolours by the artist.

Most focus on views which showcase the timeless wonder of England’s peninsula county.

Heseldin excelled at watercolours of Cornish street and harbour scenes, with somewhat detailed compositions perhaps due to his training as an architectural draughtsman.

It was to Newlyn, Penzance, that Sir Terry Frost moved from St Ives in the mid 1970s.

One of the leading international abstract artists of his time, the abstract limited edition screen print ‘Red, Black and White’, pictured at the top of this page, is Lot 685 in the March 15 sale. The print is signed and numbered 2/100.

Images of the Cornish landscape abound elsewhere in the sale, with a number of works by Richard Tuff, Amanda Hoskin and an acrylic on board study of Fowey by Tim Treagust.

The March 15 Antiques & Home Sale also includes a large number of contemporary pictures and work by other artists from all over the world, including a number of original oils and limited edition prints by renowned Argentinian painter Fabian Perez.