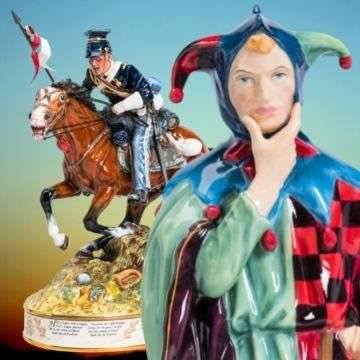 ROYAL Doulton Prestige figures are among an impressive array of ceramics going under the hammer in Day One of Richard Winterton Auctioneers’ Two Day Antiques & Home Sale on Monday, July 5.

Lot 640 is a 43cm tall Royal Doulton Prestige figure ‘The Charge Of The Light Brigade’ HN3718, designed and modelled by Alan Maslankowski and estimated at £800-£1,200.

Lot 477 is a limited edition figure HN3925, number 37 of 85, to celebrate the 85th anniversary of the Royal Doulton Figure Collection.

Estimated at £600-£800, the decoration is based on the pattern book design of the earliest version introduced in 1918.

Other ceramics in the sale include Beswick, Border Fine Arts and Disney and there are dinner services including Royal Albert Old Country Roses.

Day One of the auction also features a number of vintage Omega and Rolex watches, including a 1973 stainless steel Rolex Explorer II, a 1985 Rolex GMT-Master and a collection of military watches to include Second World War ‘Dirty Dozen’ models by Eterna and Record.

Consigned for the same sale is a large collection of silver, an array of gem set jewellery including diamond rings worth thousands of pounds, a mysterious set of rare Manx 10p coins which may be the only mint examples left in existence and a fine selection of vintage Corgi toy vehicles.

Day Two includes antique and modern design furniture. The sale both days starts at 9.30am.

For auction enquiries and to book a valuation appointment, telephone 01543 251081 or email office@richardwinterton.co.uk.

Auction is a great place to find all kinds of art from paintings and contemporary pictures to limited edition prints like this John Lennon canvas. These feature in our next Lichfield auction 🖼⬇