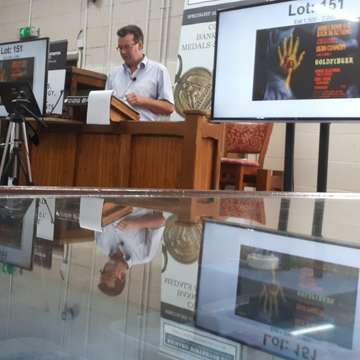 A RARE James Bond movie poster has fetched one of the highest prices ever at auction in Lichfield, Staffordshire.

The 1964 Goldfinger ‘Style B’ poster by Robert Brownjohn eventually sold for a whopping £6,700 to a winning bidder over the telephone during Richard Winterton’s Collectors Sale on Monday, June 11.

It is thought to be one of the highest prices paid to date for such a poster.

Rob French, customer relations manager at Richard Winterton Auctioneers, said: “We knew we had got something special from the amount of interest from the internet and telephone calls requesting more information and condition of the poster.

“But the final amount achieved was quite amazing and rocketed past the estimate.”

You can watch the auction and auctioneer Richard Winterton’s priceless reaction in a video posted to our Facebook page.

Mr Winterton said: “From a dusty old farmhouse down the road… bang! You never know what’s behind every door – every time!”

Another poster advertising Sean Connery’s previous James Bond film, 1963’s From Russia With Love, achieved the lower end of the estimate of £1,000.

Both posters were printed by Stafford & Co, the main printers for film posters at the time, and came from an address in Dosthill, Tamworth.

Also discovered in Dosthill – but at a separate address – was a signed letter from first man on the moon Neil Armstrong, which sold in the Collectors Sale for £620. 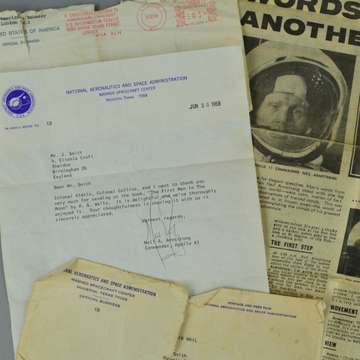 The signed letter from Neil Armstrong – on NASA letterheaded paper – has a lovely personal story behind it.

The letter was sent to the vendor’s father, Birmingham man Mr J Smith from Eltonia Croft, Sheldon, one month before the lunar landing, in response to a book his father has sent the three Apollo 11 astronauts.

The signed response – pictured above – reads: “Colonel Aldrin, Colonel Collins and I want to thank you very much for sending us the book ‘The First Men In The Moon’ by HG Wells.

“It is delightful and we’ve thoroughly enjoyed it. Your thoughtfulness in sharing it with us is sincerely appreciated.”

The letter is on NASA Manned Spacecraft Centre paper and is dated June 3, 1969.

The lot included a signed letter from James T Pettus, Office of Public Affairs at the United States Information Service, the American Embassy, London, to where the book was originally sent.