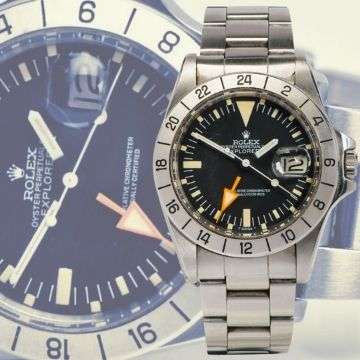 A STAFFORDSHIRE auction proved to be the one to watch as bidders from across the world battled over a ‘timeless’ collection of timepieces.

The stainless steel Rolex was part of a private collection of 11 wristwatches including a rare Eterna ‘Dirty Dozen’ World War Two British military timepiece – running and functioning well despite being almost 80 years old – which sold for £700.

A lady’s 18ct gold Jaeger-LeCoultre Hermes went under the hammer for £440 and an Ebel Beluga steel and diamond wristwatch made £600.

Three Omega wristwatches in the same sale sparked a great deal of interest. An Omega Constellation chronometer sold for £500 and an Omega Seamaster Cosmic made £320 – both were part of the aforementioned private collection.

Click here for details on our range of valuation options

Auctioneer Richard Winterton said: “Following its launch in 1971, the Rolex Explorer II was less popular commercially but it’s a very different story today, with the watch highly sought after by connoisseurs and collectors.

“The distinctive orange 24 hour hand was originally intended to help the intrepid wearer keep track of day and night in dark places such as caves or extreme environments where the sun never sets.

“A large triangle marker at 12 o’clock, cyclops eye for the date aperture at 3 o’clock and ‘frog foot’ coronet marked this model out as a watch somehow simultaneously atypical of the brand and quintessentially Rolex.

“In fine functioning condition and presented on the original Oyster bracelet, we expected this to be another timeless example of how vintage watches can powerfully accumulate in value and we weren’t disappointed.”

Also going under the hammer on the same day was a large collection of ceramics including five large Royal Doulton Prestige figures depicting The Charge Of The Light Brigade, jester Jack Point in three colourways and a limited edition King Charles I, totalling £3,490.

Further Two Day Antiques & Home Sales are scheduled for July 12-13, July 19-20 (including rare whiskies and wine) and August 9-10, with a Single Owner Collection auction including Ruskin ceramics on Tuesday, August 17.

Sales start at 9.30am and all catalogues can be viewed online via our Auction Dates page.

Happy Monday morning everyone! Just a quick reminder that we're offering FREE valuations of jewellery and watches in Sutton Coldfield at The Trinity Centre today and The Hub at St Mary's in Lichfield city centre tomorrow. Discover our options for free valuations of all items at www.richardwinterton.co.uk/valuation-events/ ... See MoreSee Less

Seats to suit everyone coming up on Day Two of our next sale, from 1970s deckchairs and modern beech rockers to Ercol, Tam Tam stools, carved oak and leather recliners, armchairs and Chesterfield

A sealed Pokémon Fossil booster box set to sell for thousands is Lot 542 in our next sale, with other Pokémon trading card collections featuring as Lots 548, 549 and 551... 🎴